ORLANDO, Florida–
When it comes to the state of Apple Computer, everyone has an opinion.

And at the Gartner Symposium and ITxpo97 here today, the CEO of competitor Dell Computer added his voice to the chorus when asked what could be done to fix the Mac maker. His solution was a drastic one.

“What would I do? I’d shut it down and give the money back to the shareholders,” Michael Dell said before a crowd of several thousand IT executives.

Dell’s comments follow Steve Jobs’s keynote address at the Seybold trade show last week in San Francisco, where the Apple cofounder seemed to win over attendees with his explanation of why he had made certain key decisions, killing the clone market and aligning more closely with Microsoft. The Seybold crowd–as well as some Apple employees–also seemed to be buoyed by the increasing role Jobs has taken on at the company as board member and interim CEO.

But others, like Dell, appear to think that Jobs’s expanded role isn’t helping. There is some concern that Apple will have a hard time recruiting a top-notch CEO because of Jobs’s presence.
Others fear that Apple could end up completely in Microsoft’s camp by deciding to use the NT operating system on its servers. Apple is reportedly planning to come out with network computers that would require high-end servers to function.

While many industry executives have offered opinions on how to right Apple’s ship, no high-level executive has made as blatant a comment as Dell’s.

Flash forward 15 years, and let’s see how Dell is doing compared to Apple: 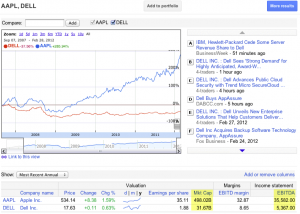 Mind you, I completely understand Dell’s POV back then, and it was shared by most of the industry. Apple was messed up, and it was two heartbeats from death. It’s quite amazing what Jobs and his team did to turn it around into the company it is today.

Kevin Jarnot is a technologist who lives just South of Boston, MA. He is currently employed as Chief Technology Officer at Micronotes, an AI-driven conversation-marketing company based in Boston, MA.
View all posts by Kevin →
This entry was posted in Amusements, Mac, Stupidity, Tech. Bookmark the permalink.