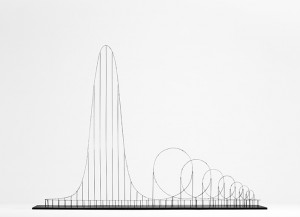 The Euthanasia Coaster would kill its passengers through prolonged cerebral hypoxia, or insufficient supply of oxygen to the brain. The ride’s seven inversions would inflict 10 g on its passengers for 60 seconds – causing g-force related symptoms starting with gray out through tunnel vision to black out and eventually g-LOC, g-force induced loss of consciousness. Depending on the tolerance of an individual passenger to g-forces, the first or second inversion would cause cerebral anoxia, rendering the passengers brain dead. Subsequent inversions would serve as insurance against unintentional survival of passengers.