A bit of Apple history. From wikipedia:

The dogcow, also known as Clarus the Dogcow, is a bitmapped image first introduced by Apple. It is the shape of a dog, originally created in 1983 as part of the Cairo font by Susan Kare as the glyph for “z.” 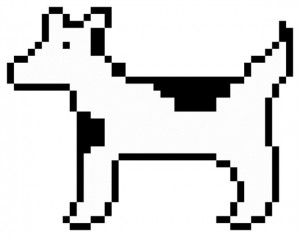 The term “dogcow” was first coined by either Scott Zimmerman or Ginger Jernigan. Mark “The Red” Harlan named the dogcow “Clarus” as a joking reference to Apple’s former office-software unit, Claris. The sound she makes is Moof!

Kevin Jarnot is a technologist who lives just South of Boston, MA. He is currently employed as Chief Technology Officer at Micronotes, an AI-driven conversation-marketing company based in Boston, MA.
View all posts by Kevin →
This entry was posted in Mac. Bookmark the permalink.