Strike Three for the Massachusetts?

First it catches on fire in the middle of Boston Harbor. Next, it is hit by another commuter boat while I am onboard. Today, while on a whale watch with my family, we see this near Deer Island in Boston Harbor: 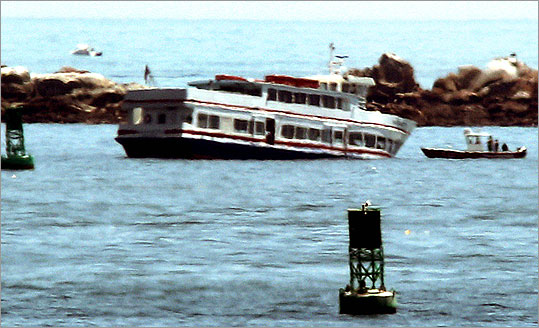 More than 170 passengers and crew of a vessel that ran aground this morning 1.5 miles off Deer Island in Boston Harbor were being taken to shore in Hull by the Coast Guard, local agencies, and even a few lobster boats, according to the Coast Guard and witnesses at the scene.
The 87-foot passenger vessel, Massachusetts, ran aground after straying from the safety of the south channel, said Demos Kouvaris, a recreational fisherman who heard the distress signal and hurried to the scene in his own boat. The boat strayed from the safety of the South Channel as it was heading away from Boston Harbor and struck an underwater formation called “Devil’s Back.”