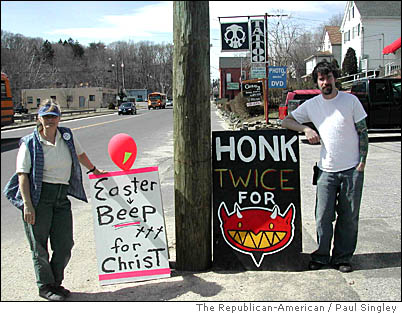 When Claudette Soden put up a sign asking motorists to beep for Jesus outside her business in Naugatuck, Conn., fellow business owner Phil Young took exception. He thought it smacked of religious intolerance, so he erected his own sign.

Follow-up – from the Hartford Courant:

A local zoning dispute has become for some a battle of good vs. evil.

The owner of a photo store, who says her business partner is Jesus, began Holy Week by putting signs outside her store urging passing motorists to show their support for the Christian holiday. “Easter: Beep for Christ,” the signs said.

Phil Young, owner of a neighboring tattoo store, soon after put out a sign urging motorists to honk twice for Satan.

While the messages are irrelevant, zoning ordinances require signs to pertain to what businesses sell, do not block sidewalks and do not create a hazard, Mayor Ron San Angelo said.

“We’ve got to follow our zoning regulations. That’s all we care about,” he said.

Claudette Soden, owner of Photos Onto DVD, had put similar signs up at Christmas when her business was at a different location and said she was continuing that tradition at Easter.

By Tuesday, Young’s sign was gone. Soden was refusing to remove hers.

“Easter has not passed yet,” she said.

Young, who did not respond to a request by The Associated Press for comment, has said he viewed Soden’s message as a sign of religious intolerance for non-Christians. He told the Republican-American of Waterbury he put his sign up because he wanted to present an alternate view.

“My main point is that we share a parking lot, and what goes on in this parking lot represents not only hers, but both shops,” he said. “What she does inside her business is her business.”

Soden, who keeps a Bible on her countertop and displays on her wall a business partnership agreement between her and Jesus, said she was not bothered by Young’s posted image of Satan.

“It didn’t offend me, but I know it offended Christ,” she said.

As if the two religious messages weren’t enough, a third business owner jumped into the fray by putting out a sign touting civic virtue.

Roger DeVack, owner of Computer Repair Tech that shares retail space with Soden’s business, said he briefly put out a sign urging motorists to honk for the American flag. The sign displayed the red, white and blue.

He saw nothing wrong with Soden’s sign and was annoyed at the fight it prompted.

“It just seems asinine why people have to turn this into a slugfest between good and evil,” he said.