Maintenance crews in Washington state spotted a snow doughnut last week on the North Cascades Highway. At first glance, a snow doughnut may look like a man-made creation. But Mike Stanford, who snapped this photo, assures Robert Siegel that snow doughnuts are real — but rare — natural occurences. 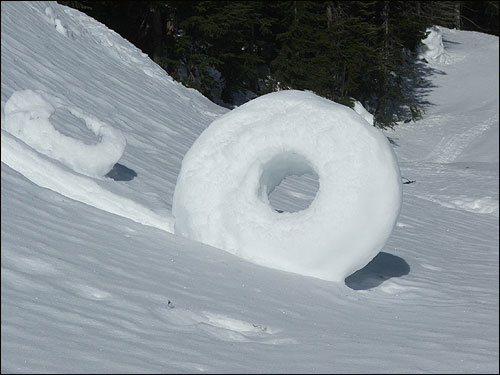 Stanford, who has worked as an avalanche forecaster and control technician at the Washington State Department of Transportation for more than 30 years, says he’s never seen a snow doughnut as large as the one in this photo. It’s roughly 26-inches tall with a 8-inch diameter hole.

“It’s formed by a clump of snow falling off of a cliff or a tree into the snow pack. And if the conditions and temperature are just right, as gravity takes over, it pulls the snow down, and it rolls back on itself,” Stanford says. “Usually the center collapses and it creates what we call a pinwheel.”

But when the hole stays open, it creates a shape that resembles a car tire covered with ice, or a gigantic, white Cheerio.