A Hexagon on Saturn

“We’ve never seen anything like it on any other planet,” says atmospheric scientist Kevin Baines of the Jet Propulsion Laboratory. It is a hexagon twice as wide as Earth encircling Saturn’s north pole. First observed by the Voyager spacecraft in the 1980s, the hexagon has been sighted anew by the Cassini probe. 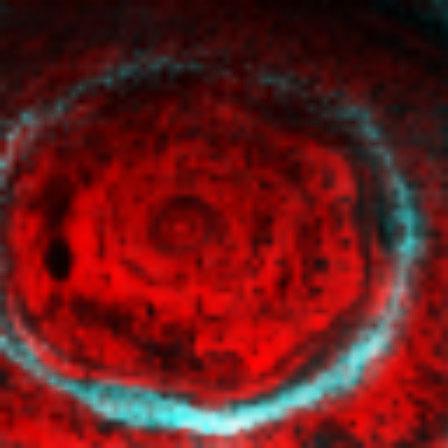 In this infrared photo taken by Cassini’s VIMS camera, the blue color traces auroras at high altitudes in Saturn’s atmosphere. Red indicates the amount heat filtering up through clouds below. Researchers believe the auroras and the hexagon are unrelated.

The hexagon could be a distant cousin of Earth’s polar vortex, but while Earth’s vortex is a circle, Saturn’s may be molded into a hexagon by some strange pattern of atmospheric waves. “Saturn’s thick atmosphere where circularly-shaped waves and convective cells dominate is perhaps the last place you’d expect to see such a six-sided geometric figure,” says Baines. In short, it’s a mystery.