Stephenson's "Diamond Age" Being Made into Miniseries

One of my favorite books of all time is being made into a miniseries on SciFi. From BoingBoing:

Neal Stephenson’s Hugo-award winning masterpiece The Diamond Age is being made into a SciFi Channel miniseries. The Diamond Age tells the story of a group of neo-Victorians who’ve embraced strait-laced ethics and craftsmanship as a response to the infinite possibilities of nanotechnology. It features a stupendously imaginative interactive storybook, moments of convulsive hilarity, and a lovely explanation of Turing-complete computing. It’s my second-favorite Stephenson novel (after Cryptonomicon), so don’t screw it up, SciFi! 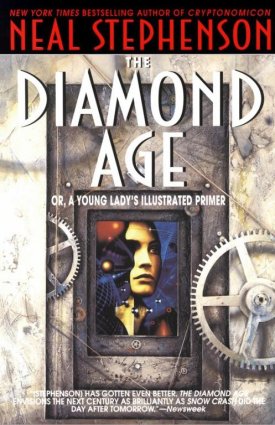 Diamond Age, based on Neal Stephenson’s best-selling novel The Diamond Age: Or a Young Lady’s Illustrated Primer, is a six-hour miniseries from Clooney and fellow executive producer Grant Heslov of Smokehouse Productions.

Kevin Jarnot is a technologist who lives just South of Boston, MA. He is currently employed as Chief Technology Officer at Micronotes, an AI-driven conversation-marketing company based in Boston, MA.
View all posts by Kevin →
This entry was posted in Geek, Interesting. Bookmark the permalink.