DENVER — SkyFox captured incredible video of a Russian rocket body bursting into flames as it crashed to earth over North America.

NORAD has confirmed that the light show was caused by the re-entry of a spent russian science rocket or “space junk” in layman’s terms.

SkyFOX pilot Rob Marshall and photojournalist Josh White captured the event at about 6:15 a.m. Mountain Standard Time while they were flying over Denver.

Descriptions range from an “unreal bright light” to a “spectacular fireworks display.” 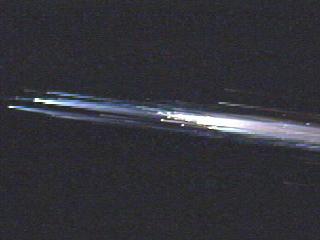 Those are just a few of the comments from people who witnessed a light show in the skies over Colorado early Thursday, a light show that the North American Aerospace Defense Command and the United States Northern Command — better known as NORAD and NORTHCOM says was a Russian Rocket.

Experts at the Air Force Space Command, headquartered at Peterson Air Force Base near Colorado Springs, say it was a Russian SL-4 rocket body that re-entered the atmosphere over Colorado and Wyoming.

The rocket was used to carry a French astronomy satellite called COROT into space on December 27, 2006.

NORAD has a report that a piece of the rocket landed in Riverton, Wyoming near Highway 28 at about 6:13 a.m. Thursday.

No damage has been reported and the debris is not believed to be hazardous.

Calls started pouring in to law enforcement authorities and FOX 31 News around 6:15 a-m, as thousands of people witnessed streaks of light racing across the sky from north to south.