My company had its summer outing yesterday on Thompson Island in Boston Harbor. While waiting for the rest of the employees to show up on the Long Wharf, my wife told me she had to use the bathroom. She went off in search of public facilities while I waited outside in front of the New England Aquarium. As I paced around the area, I saw a large kiosk labelled “City Toilet”. Heather came back a few minutes later — she couldn’t find a bathroom — and I showed her the kiosk. It was roughly 20 feet long, 10 feet deep, with USS Enterprise-style doors. A computer display on the front stated that it cost $0,25 (ooops – incorrect localization!) for 20 minutes. Heather popped in a quarter, the doors slid open, and she entered the kiosk. The doors closed with a “whoosh”.

A few minutes later she emerged, smiling widely. “That was the coolest bathroom ever”, she said. My turn. I went to put my quarter in, but the display stated that it was currently being sanitized, and a progress bar inched towards completion. When it finished, it said “ready” and I inserted my quarter. I was then asked where I wanted the toilet positioned – “left”, “right”, or “center”. I pressed center and then entered. 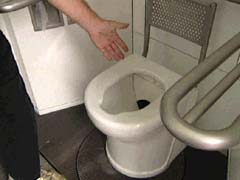 The room was very spacious with a large mirror (not a traditional public bathroom mirror-like shiny piece of metal), sink, and centered toilet. New Age-y music (Tangerine Dream meets Ty-D-Bowl) was playing over a speaker. I settled myself in and did what I came to do. When I finished, I pressed an ergonomically-placed “flush” button and the bowl emptied.

The sink, like everything else in the room, was completely hands free. There were three labelled areas where I could place my hands – “soap”, “wash” and “dry”. Each was activated via proximity sensors. When I approached the doors, all I had to do was lightly tap the “door open” button with my foot. After the doors closed, I could hear the sanitization process start up.

German engineering at its best.